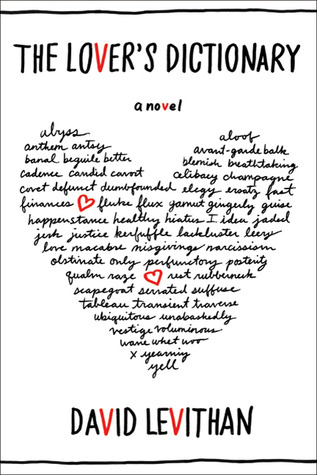 If the moment doesn’t pass, that’s it—you’re done. And if the moment does pass, it never goes that far. It stands in the distance, ready for whenever you want it back. Sometimes it’s even there when you thought you were searching for something else, like an escape route, or your lover’s face.

How does one talk about love? Do we even have the right words to describe something that can be both utterly mundane and completely transcendent, pulling us out of our everyday lives and making us feel a part of something greater than ourselves? Taking a unique approach to this problem, the nameless narrator of David Levithan’s The Lover’s Dictionary has constructed the story of his relationship as a dictionary. Through these short entries, he provides an intimate window into the great events and quotidian trifles of being within a couple, giving us an indelible and deeply moving portrait of love in our time.

livid, adj.
Fuck You for cheating on me. Fuck you for reducing it to the word cheating. As if this were a card game, and you sneaked a look at my hand. Who came up with the term cheating, anyway? A cheater, I imagine. Someone who thought liar was too harsh. Someone who thought devastator was too emotional.

The Lover’s Dictionary turned me into this mushy lil marshmallow. I felt a lot of emotions when reading this: i smiled a lot because i can relate. i harbored resentment when trust was broken. i felt complete when despite the frustrating times, the couple worked out their differences. Truly, The Lover’s Dictionary is a haven for hopeless romantics!

I love how Levithan presented his story – through snippets of the couple’s lives encased in vocabulary words. I basically have to read between the lines and i loved that. This kind of storytelling was so unique and effective it made me think: a word can really have a whole lot of meaning, right? Arrears. Dumbfounded. Libidinous.

The Lover’s Dictionary is a quick read (211 pgs) but the writing will stay with me for a very, very long time. If you’re in a mature relationship who needs guidance, or you just can’t resist a romantic read, try this Levithan book. It sure made me sigh and realize how wonderful it is to have someone to love… and love me back that much. =)

Special thanks to Tina for lending me her copy while we were on vacation!

Cas Lowood has inherited an unusual vocation: He kills the dead.

So did his father before him, until he was gruesomely murdered by a ghost he sought to kill. Now, armed with his father’s mysterious and deadly athame, Cas travels the country with his kitchen-witch mother and their spirit-sniffing cat. Together they follow legends and local lore, trying to keep up with the murderous dead—keeping pesky things like the future and friends at bay.

When they arrive in a new town in search of a ghost the locals call Anna Dressed in Blood, Cas doesn’t expect anything outside of the ordinary: track, hunt, kill. What he finds instead is a girl entangled in curses and rage, a ghost like he’s never faced before. She still wears the dress she wore on the day of her brutal murder in 1958: once white, now stained red and dripping with blood. Since her death, Anna has killed any and every person who has dared to step into the deserted Victorian she used to call home.

But she, for whatever reason, spares Cas’s life.

Anna Dressed in Blood could’ve been a 5, if not for the romance that felt forced and nonsense. Blake has great moves in terrifying readers; i held my breath more than once on separate occasions! Thrilling and maniacal, Anna Dressed in Blood is one of the most frightening YA books i’ve read so far.

Cas started out as strong in character, but when Anna came along, he appeared scatterbrained and incapable. Are guys really like that? Hmmm. LOL. Anyway, Cas is just an average male lead for me. He could’ve been great, but his character’s development became null in the end. Anna was so kick-ass on the first scene! Cold, ruthless, merciless. Then Cas started hanging out at her house, and there Anna began to show some emotions or what was left of it. She’s okay, i mean i loved her when she’s the “Queen of Death”, but the solidity of her character when she’s not the “Queen of Death” did not hold much for me. Perhaps i just want her to be at her baddest?

The horror aspect is fantastic. Voodoo magic has that air of mystery and fright that i don’t wanna dwell in the middle of the night. The romance part is negligible. Lemme just say that a relationship between a human and a ghost is just uncomprehensible to me.

Anna Dressed in Blood is a good halloween read. If you’re up for some jolly ‘ol scare, this book won’t disappoint. Well, just don’t mind the romance and you’ll be good.

until the end of time.