I wanted the role of Juliet more than anything. I studied hard. I gave a great reading for it—even with Bobby checking me out the whole time. I deserved the part.

I didn’t get it. So I decided to level the playing field, though I actually might have leveled the whole play. You see, since there aren’t any Success in Getting to Be Juliet in Your High School Play spells, I thought I’d cast the next best—a Fame spell. Good idea, right?

Good thing he’s sweet and enthusiastic about helping me with the play…and—ahem—maybe a little bit hot. But he’s from the past. Waypast. Cars amaze him—cars! And cell phones? Ugh.

Still, there’s something about him that’s making my eyes go star-crossed….

The Juliet Spell could’ve been good. Sadly, after a funny and enjoyable start, the cracks started to appear. Douglas Rees lost his grip on me when Edmund acted out like a modern-day, hormone-driven teenage boy instead of a gentleman from Elizabethan times. I was annoyed with Miranda over her falling in love with Edmund a day after she ‘magicked’ him into her present time. C’mon, man. That fast?!!

Miranda, who desperately wanted to be Juliet in her school’s play, got more than she bargained for. She only wanted to be Juliet when she conjured the spell. Instead, Edmund turned up. Miranda is pitiful, watching Edmund play Romeo both in the stage and in real life. What I don’t understand is how she acted like she has any claim on him on such a short time they’ve been together. I don’t like Edmund: immature and child-like. If there’s anything I’d like from the characters, it’s Drew. He’s smart, loyal, and very talented.

The Juliet Spell took me behind the curtain of theatre, be it a school play only. The time travel of Edmund wasn’t much of a thrill for me (I was lost on the ‘neutral space’ theory). I did not see that twist coming but it does little to excite the conflict. Well, I liked the ending – not entirely sad, but hopeful. The Juliet Spell is just a so-so read for me.

Thank you NetGalley and Lisa Wray for granting my galley request. 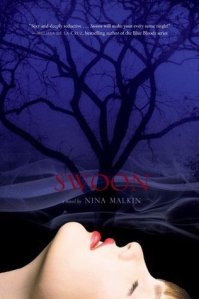 Torn from her native New York City and dumped in the land of cookie-cutter preps, Candice is resigned to accept her posh, dull fate. Nothing ever happens in Swoon, Connecticut…until Dice’s perfect, privileged cousin Penelope nearly dies in a fall from an old tree, and her spirit intertwines with that of a ghost. His name? Sinclair Youngblood Powers. His mission? Revenge. And while Pen is oblivious to the possession, Dice is all too aware of Sin. She’s intensely drawn to him — but not at all crazy about the havoc he’s wreaking. Determined to exorcise the demon, Dice accidentally sets Sin loose, gives him flesh, makes him formidable. Now she must destroy an even more potent — and irresistible — adversary, before the whole town succumbs to Sin’s will. Only trouble is, she’s in love with him.

What do you do when the boy of your dreams is too bad to be true?

You are my life, but you are not my purpose.

Swoon started out great. Then Sinclair came into the scenes, making Dice ‘swoon’ and cheap, then somewhere in that crazy book the plot loses its substance. I did not mind the sexual innuendo at first, but then it gets nastier. Ugh. If it were up to me, I’d list Swoon under Adult Paranormal Romance. Nina Malkin, I have expected more story than this.

Dice is a psychic, or so she says. Her psychic part was barely developed… oh, wait. It helped her with seeing, talking and touching Sinclair. I cannot imagine a far more pathetic heroine than Dice. While Sinclair is so busy ruining people’s lives in Dice’s town, all she can do is pant and lust after him. What the H? She doesn’t do a thing to prevent Sinclair’s wickedness. She just mopes, fantasize, then lust (again) after Sin. Dice has no self-respect at all. Sin slept with her close friend and yet, she wasn’t turned off. Sin spanked her in front of the kids until she comes (yes, for that big O) and still, she’s in love with him. The ending summed up the book very nicely: cheap and senseless. Do you see why I’m riled up?

The storyline is all over the place and the characters are unlikeable. I read Swoon because I got its sequel, Swear, from Simon & Schuster Galley Grab. It looks like I shouldn’t have bother. 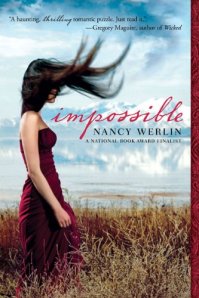 Lucy is seventeen when she discovers that she is the latest recipient of a generations-old family curse that requires her to complete three seemingly impossible tasks or risk falling into madness and passing the curse on to the next generation. Unlike her ancestors, though, Lucy has family, friends, and other modern resources to help her out. But will it be enough to conquer this age-old evil?

A beautifully wrought modern fairy tale from master storyteller and award-winning author Nancy Werlin.Inspired by the classic folk ballad “Scarborough Fair,” this is a wonderfully riveting and haunting novel of suspense, romance, and fantasy.

Impossible might be construed as a contemporary book, but the fantasy (and horror) of it far made more of an impression of me. I want my fairy tales to be fluffy and happy, but Impossible turned that upside down! This story reminded me of that freaky character Rumpelstiltskin. Nancy Werlin got no little man for a villain, but rather a sinister Elfin Knight.

It started off as a normal contemp. A prom. A date. A night full of promise. Just as I started getting comfortable, Werlin lashed with her first curveball. Bang! Lucy lost herself after one act of violence. Bang! Bang! Lucy grappled with the worst reality teen girls will have to face. Wow. I did not know things could turn out from worse to worst in a blink of an eye. But it did for Lucy, and oh, how I wept with her. Lucy was not impressionable at the start, but as she learns abou ther family’s curse and what otherworldly power she’s up against, her steel began to show. What she wouldn’t do for her love and her family – that is where her strength lays.

Zach has the strongest, most developed character. He’s denial at the beginning, then funny, then responsible. His resilience and determination to not give up at the most hopeless times is amazing! Do you have someone like Zach? Then you are so very lucky 😉 Leo and Soledad are solid characters, too. I can feel their warmth and love all throughout Lucy’s ordeal.

The idea of three impossible tasks is intriguing but I was not that convinced of how the riddles were solved. I found the fantasy part lacking, but the Elfin Knight sure is creepy. What I love about Impossible is that beneath the fantasy lies the reality that a family is struggling and fighting to survive when tragedy struck (even if it is paranormal).

Impossible is not that perfect but I daresay the weak points compliment the good ones. It is a good read but I don’t want to read it again. Like I said, the Elfin Knight and his vindictiveness creeps me out. Eek.

until the end of time.