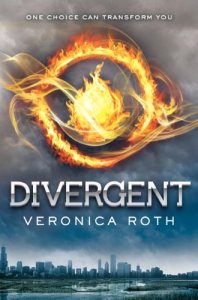 In Beatrice Prior’s dystopian Chicago world, society is divided into five factions, each dedicated to the cultivation of a particular virtue—Candor (the honest), Abnegation (the selfless), Dauntless (the brave), Amity (the peaceful), and Erudite (the intelligent). On an appointed day of every year, all sixteen-year-olds must select the faction to which they will devote the rest of their lives. For Beatrice, the decision is between staying with her family and being who she really is—she can’t have both. So she makes a choice that surprises everyone, including herself.

During the highly competitive initiation that follows, Beatrice renames herself Tris and struggles alongside her fellow initiates to live out the choice they have made. Together they must undergo extreme physical tests of endurance and intense psychological simulations, some with devastating consequences. As initiation transforms them all, Tris must determine who her friends really are—and where, exactly, a romance with a sometimes fascinating, sometimes exasperating boy fits into the life she’s chosen. But Tris also has a secret, one she’s kept hidden from everyone because she’s been warned it can mean death. And as she discovers unrest and growing conflict that threaten to unravel her seemingly perfect society, she also learns that her secret might help her save those she loves . . . or it might destroy her.

Debut author Veronica Roth bursts onto the YA scene with the first book in the Divergent series—dystopian thrillers filled with electrifying decisions, heartbreaking betrayals, stunning consequences, and unexpected romance.

Part of me wonders if this is a suicide mission disguised as a game.

The author made an impressive debut. and there’s a reason why it is #6 in NY Bestsellers list a week after its book release.

This is a fraternity/sorority initiation rites (with extreme sports on the side) – dystopian way. *evil grin!*

The story is beautifully crafted. The pace is exhilirating; sometimes i need to go back a page or two to relive its moments, i felt i will be left behind if i can’t read fast enough. The development of the characters is just right on time – not slow but not hurried,either.

I have a new favorite heroine – TRIS! She is ass-kicking, gun-wielding chick who’s afraid of a lot of things but faces fear anyway. She is small, skinny, not pretty but the way she uses her weaknesses as strengths is genius! Maybe she’s a little dense (when it comes to Four), and a little selfish (when it comes to her family). But the selfnessness she hates (that’s why she left her Abnegation faction & family) ultimately marked her as the Dauntless she wanted to be.

the one thing that i truly love about her: she isn’t scared of having bad thoughts, dark thoughts and intentions towards other people. It only means one thing: an eye for an eye. a tooth for a tooth. i super love her! *hugging Tris*

‘People often understimate my character’ she said quietly. ‘They think that because i’m small, or a girl, or a Stiff, i can’t possibly be cruel. But they’re wrong.’

FOUR, you are sooo mine! A hero who is equally strong and troubled as Tris, he is the perfect imperfect love interest in any dystopian i’ve ever read. He’s cold, efficient, (almost) invincible. But at the same time he is kind, compassionate, and selfless. *sighs* Four is one unforgettable character 🙂 and in a dangerous place such as the Dauntless compound, Four is the love Tris has never seen coming. *fanning myself*

Initiation Rites (jumping on and off the train/roof, fistfights!)

Tris and Four on the chasm *squeals!*

Tris and Four on the train *double squeals* (ahem.)

Tris and Four on the computer room (UFC scene!)

The ending was a little bit soft for me (like how i wished two or more of the villains were killed by Tris or Four) but it was not a cliffhanger so it is satisfying (after all, there’s book 2, so villains – watch out!).

As a stand-alone, I consider Divergent a pretty amazing book. I am BLOODTHIRSTY for more!!!

VERDICT: You think you are brave? Then read this. It will make you think twice.

I am not Abnegation. I am not Dauntless. I am Divergent.